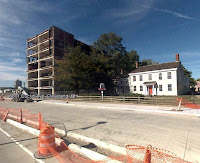 When I came across a glossy flyer for the proposed demolition and expansion of "urban" garden space at the Dunham Tavern, I was taken a back. My favorite potential re-use project was Photoshopped, however poorly, out of the image. Yes, the recently demolished reinforced concrete modernist industrial building on Euclid was my favorite reuse prospect in the city of Cleveland.

As I shared my discontent with colleagues in City Planning and Landmarks, I received some perplexed expressions and some shaking heads of agreement. Why was this architecturally uninteresting building of interest to a historic preservationist?

In preservation we argue to save context, but somehow, if the context isn't pretty enough or backed by financial gurus, we easily dismiss the resources and issue its death warrant.

Today, I found a local blogger, Daniel DeAngelo, who shared my frustration.
http://thecivicartcleveland.blogspot.com/2012/06/proposed-dunham-green-good-or-bad-for.html

In his blog entry, DeAngelo shows examples of what the Dunham Tavern project is attempting to accomplish. But in his examples, he shows why the project is ultimately faulty.

Trying to use urban gardening and demolition of buildings as a solution to disinvestment has short-lived benefits and long-term devastating effects. Simply look at MidTown and the Hough neighborhood to find examples of why demolition spurs further demolition. Some of the late Councilwoman Fannie Lewis' mcmansion solutions sit abandoned and boarded next to vacant lot after vacant lot with random old buildings isolated in a sea of vacant lots.

So, the building has since been cleared, the vacant lot remains. The Dunham Tavern now stands alone in an artificially created historic environment.

Cleveland, what are you? Where you not an industrial giant? Do you not want to rebuild with new industry?
If so, then stop demolishing the buildings that will be home to this revolution.

The embodied energy of the 6611 Euclid Avenue building was equivalent of 607304 gallons of gas.
While the demolition alone cost 864000000 worth of gallons of gas.

For a firsthand look at the demolition and celebration, see:
http://www.newsnet5.com/dpp/news/local_news/cleveland_metro/euclid-avenue-building-in-cleveland-demolished-for-expansion-of-historic-dunham-tavern-museum
Posted by Jessica R. Wobig at 10:20 AM

Resources to Check Out